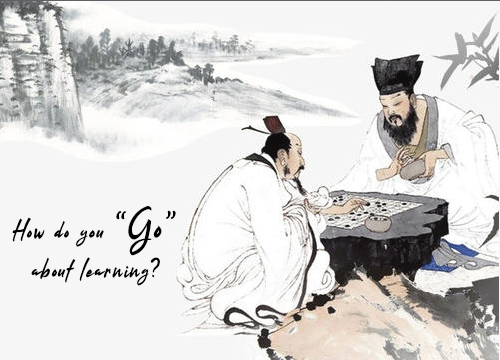 Linking the past to present and future: Ancient wisdom still applies in modern learning.
Have you experienced these ancient learning progressions in your martial art journey?

WeiQi (圍棋), also known as Go, is a traditional strategy board game that was invented over 2500 years ago in China, and believed to be the oldest board game that is still being played at the present day by tens of millions of people.

Before the modern numeric nine “Professional Dan” rankings was used, terminologies from Buddhism and Chinese traditional philosophy were incorporated into ranking title names, and this write-up is meant to explain what they mean, and how we can relate them to our personal development in any field.

The nine ranks (品 Pin) are divided into three tiers (Lower, Middle, Upper), and each tier has another three levels (Lower, Middle, Upper).  Following is the list of ranks in order of the lowest to highest, where 9th Pin is the lowest rank, to 1st Pin as highest, and including the vernacular interpretation by a Ming Dynasty 16th-Century WeiQi strategy book called 石室仙機 (Shi2 Shi4 Xian1 Ji1) “The Divine Prophecies of the Stone Room”, and also another book named 弈薮 (Yi4 Sou3)

One may not yet know when to attack or defend, and simply react as situations arise.  One who is simply hoping to stay alive can only seek to defend his unrefined acts.

One who is not yet well-versed in the principles is foolish.  Being unaware when the game is trending towards a loss, is an ignorant fool.

Usually given a five-stone (game pieces) handicap by the top ranked player.  The player seeks to battle with every move, and compete with the opponent with only brute force instead of using wits.

Given four-stone handicap by top player. The player does not plan far ahead, and relies on some clever tactics.

Given three stones.  Not yet understand all the intricacies, but uses wits in battles to achieve his goals.

Receives two stones from top ranked.  One is adaptable with intricacies of the game; knows whether to fight or flight. Able to see the complexity of the situation and have control of initiative.

One handicap from the top ranked.  Able to comprehend and apply upon seeing the shapes and formation in situations.  Posses the overall necessary composition of a top rank player but just slightly below.

Half stone handicap from the top ranked. Able to achieve the right result without much effort; able to see the right path without much pondering. Adept at changes from embraced emptiness.

Can change unpredictably, and has great foresight.  Knows the essence of the game within one’s spirit, and can conquer without fighting.  Thus skill is unrivaled.

So summarizing and relating this progression to our practices: when we are beginners, we tend to rely on what we already know, but maybe very uncoordinated.  So we act by hiding what we are not good at.  Slowly we entered the “dumb-dumb” stage as Grandmaster Sam Chin calls it, we still do not know many things.  The practices will give us some physical improvements which we may come to rely upon, but mainly still brute force.  We go on and learn some techniques, and start to know when to use those tricks to get an advantage.  As those knowledge are obtained, we begin to apply them in witty ways.  With enough knowledge and experience, we start to see more intricacies and consequences of each action.  Soon, we developed into a much well-rounded practitioner and mastered most of the necessary qualities. We can then not depend on past experience, and instead focus on the current moment to change with the changes, just as a mirror can simply reflect on the actions.  From there, we will truly have reached the top level in our system with immeasurable and unrivaled skills.

Would you agree, or do you see some stages differently?