The right power means they’ve got to do it with the right angle of movement, but sometimes we just phrase it through the reference of being ‘relaxed.’

So, “relaxed” must have all these conditions, the advantage of movement. Practically you can say that it’s all about power, limits, understanding limits, or understanding power based on the timing, spacing, and angles of movement.

That 90 degree doesn’t change; it always must be maintained in order to be with the center of gravity. The natural power and point of contact, do change – from different angles–as long as the point of contact is 90 degrees.

Hold on to the point with that 90 degrees in order to connect; this is the first main point. To review: all movements must be based on these two things: One is the center of gravity power and one is natural power on point of contact that is 90 degrees.

Do you understand what I’m saying here?

You see, now, when we have these angles, or any slight change of angle, as long as it’s 90 degrees to the point of contact, that is the natural power of 90 degrees. Later on, that mass has a relationship with the center of gravity.

So, through our joints, from our ankle, knee, the hip, the spine, the shoulder, elbow, and the wrist–all these joints. Here, itself, is how we need to balance in order to meet the 90 degrees. That is one thing.

But there are also forces that are against–when you use more force to do one little thing, that is called ‘against.’ Shun Li means that you use a minimum force and have the things done–that is called appropriate force. That kind of knowledge is based on understanding the body structure, how your ligaments, tendons, and muscles work: recognizing how it works so that you create power.

Study with Master Sam FS Chin on your own time with our series of instructional DVDs! Filmed in high quality, ... 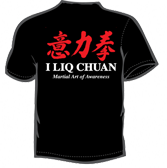 This is the official I Liq Chuan Class T-Shirt worn by students all around the world! Has the I Liq ...