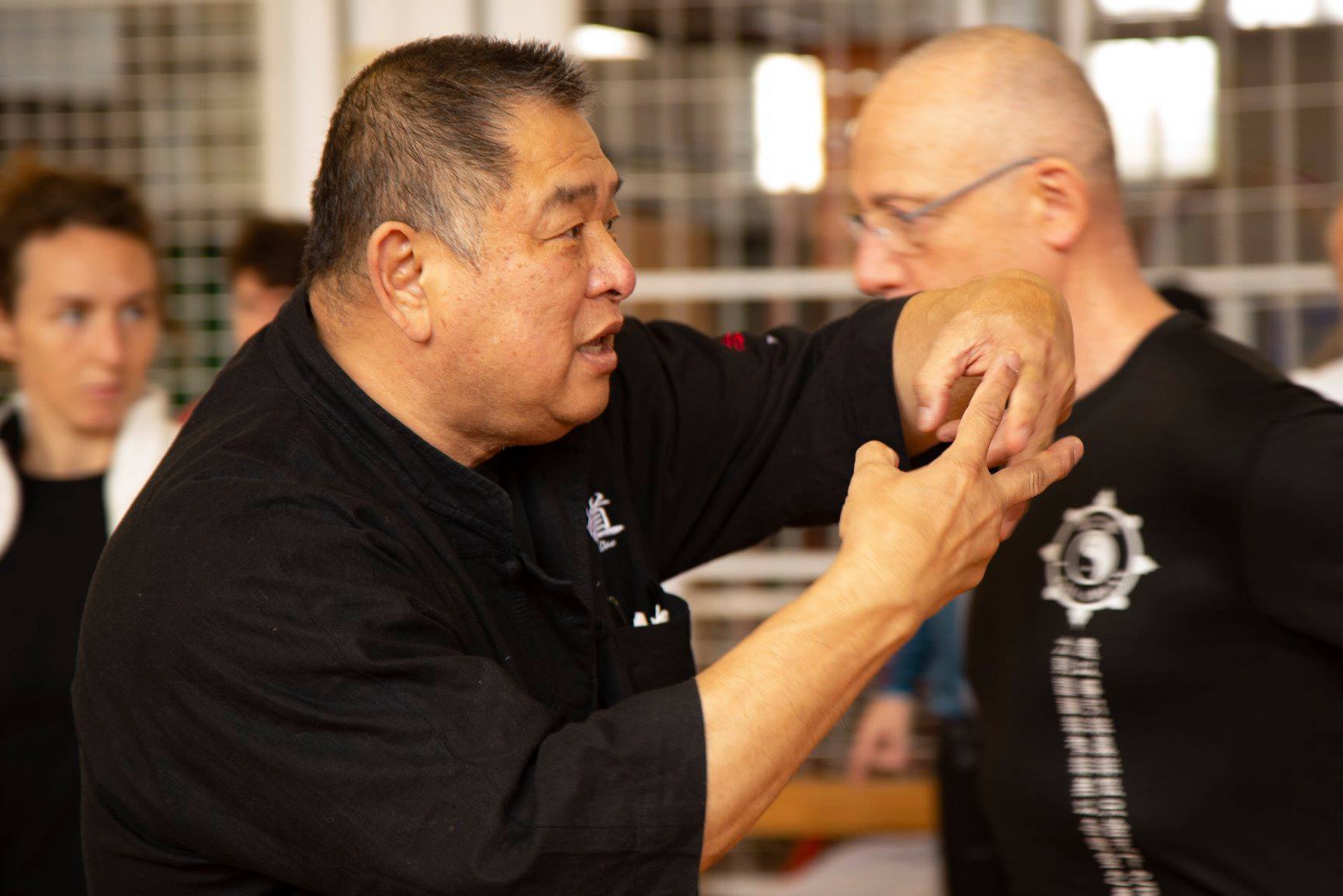 References, Rotation, and Relationship of Theory to Training 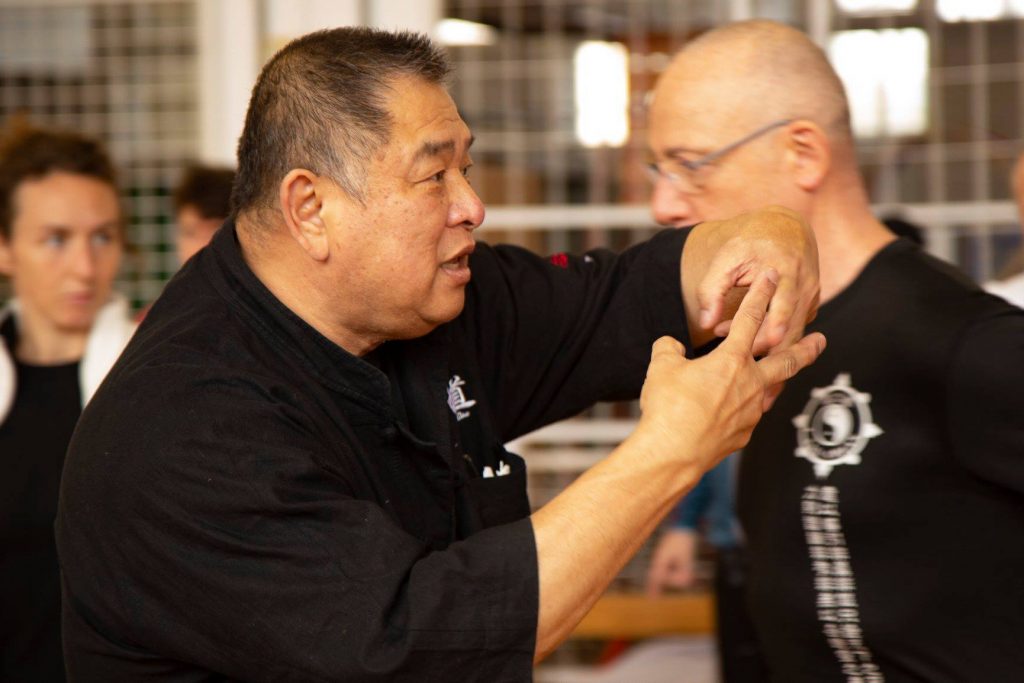 Sifu: I was just talking with Ashe so that this Thurs. and Fri. we’ll do more on the advanced a little bit: sticky and spinning hands and on Sat. we’ll go back to the foundations: the basic exercises and their functions, because they’re more beginning levels who will try to prepare for grading also. First, any questions:

Ashe: follow up from yesterday…when talking about vertical first because of the relationship of the Earth; then from there we have not necessarily the cross, but because from vertical, our perception, we have left and right: vertical divides side-to-side. But it’s not necessarily that there’s a cross there yet because cross is based on the reference point (relationship of center line and cross—based on movement).

Sifu: yes, the vertical divides left and right. Why do we use cross not the X? Because first of all everything is relationship to center of gravity first. The center of gravity is by 90 degrees direct. From 90 direct we come from the horizontal: horizontal is parallel with 90 degrees, too. That’s the nature of things: that’s the characteristic of the center of gravity, so horizontal is the balance point. Everything you see that’s in the nature (line up down, line left right), so the Reference point is connecting to the ground first. That’s why we start with the feet; the feet are the root of the body. So, Mass has a relationship with gravity: it forms this vertical line. With the vertical line in 1 point—we say this is PRIMARY plane of movement—why? Because in order to generate connection and power, you have to be holding to the point. To hold to a point, the movement is only up down and rotation (frontal and sagittal can’t hold the point—it skips).

It never leaves the ground: that ONE point; that’s why this is the beginning of that one balance point first! The feet to the floor. That’ why the first we talk about is absorb project (up down), then Condense Expand (in out). There’s 1 characteristic in movement you have to bear in mind that if you want to have a movement with a quality of a point—from a center point—you must start with rotation and up and down. From rotation and up and down you must be able to see and express the 6 directions and 3dimesntiosn. This is the core first. Whatever you do, you must always reference to her! With rotation can you do this move?

On Using Rotation to See Where the Change Happens

Why rotation? [rotates finger and gestures up and down]: because with rotation, you see and north, south, east, west first. OK? Rotation: use NSEW from the rotation you ‘see’ NSEW (north south east west) …not southeast southwest at first. You see the CROSS by itself: see the separation. Because there’s a separation—of left right and up and down. The separation of left right and up and down. I want you to see it’s because first of all, all movement is here and pointing toward a center. Circle with center: if you can hold onto circle with centers then everything must align (to the opponent). You can also say everything must align (in) to center. Why vertical and horizontal: it’s where the CHANGE of left and right, the change of up and down happens.

If you say the east and the south—that’s 1 quarter but within in here, but within there, there’s no change—no change of open and close. One quarter—within that, it’s the same (from here to here it’s the same—For example, if you’re on this side, you’re open, if you’re here, still open the whole time, for example). [At @ 11 min. mark; draws with toe on ground to demonstrate]

Yes, it keeps changing, yes, but that changing one still has to be based on this: the reference behind that. (‘the behind, one’–the vertical that’s going up down to gravity) …so multiple references but the MAIN one is this: the vertical (without this one, the others don’t mean much). Like you defend, but what are you defending? This point? No, the behind one. If you attack, what are you attacking? The in front one—it’s 1, 2, 3 [gestures from POC to center to center line and reverse: from his vertical to center point to point of contact—at 13 min. marker]. Within One is 1, 2,3, yes? But the bigger one is also 1, 2, 3: so it’s always back to the Mass. Because then it’s Object and Subject here. One itself has a cross: the cross itself has open and close itself: one. But how in action—what is meant by ‘doing correctly’? where’s the reference: The reference is in FRONT and BEHIND. you have to match these two references in order to make this correct: or else, if you do just one by itself, then it seems always correct—so then why is it wrong? Because it’s in REFERENCE TO SOMETHING ELSE. [in relationship/dialogue].

That’s how you look at things, how you meet, how you match, how you understand the half line. The hardware (the different of yin and yang) is fixed; offense and defense is NOT fixed—the line is not fixed: it’s a mix of different dimensions. Every dimension has a half line. And the rotation of movement—how you move is how you form the Fullness point that meets the opponent. Then, how’s the point that you cross the opponent’s half line: it’s based on YOU and behind, too. Yes? That’s why there’s 3 points: in the middle point, the opponent point, and your point: that’s why everything comes down to open and close—or 2 close, 2 open.

So, between you and opponent there’s always one line: you are behind this; that means you need to cross over [demonstrates how to hold defense point to cross [student chimes in: That’s ‘taking care of the point so the point will take care of you.’] Yes, you understand it and always manage the point. So the point, if you manage the point with the fullness point, then the fullness point has a characteristic and quality and conditions that is required what is needed for fullness. You lose the fullness that means people can already cross.

Listening to the Point

That’s why you need to take care of the one point, the fullness point, the fullness point takes care of itself. When we were at Bernie’s place—you guys were always trying to look at it and it wouldn’t work, because you were thinking to do something. You weren’t LISTENING to the point. And holding the point with fullness to adjust the movement to maintain. You are not adjusting to maintain to adjust the fullness; so you try to get away from there and you lose the fullness. Understand. This is a very important concept: that how you approach to do the thing is essential.

That’s why we say that you need attention in order to hold on there—attention that so strong that whatever changes, you don’t affect the fullness. Or you can say, whatever you change must align to the fullness. Then you can say that now the fullness tells you what to do. And you can say that because of that fullness it’s now a balance point. If you keep on changing with the change to maintain not to change that. so there’s a lot of different ways to talk about it. Alright?

Keep on Meeting to Adjust; Adjusting to Know

From Our DVD Catalog