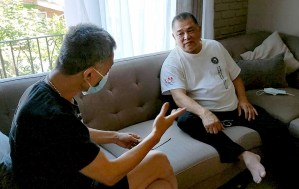 In the 7 years that I have been training in the Martial Art of Awareness, I am only now coming around to understanding the process of change, and what GM Sam Chin means when he describes the Approach to the philosophy, concepts, and principles as seeing what the means “To change with the changes in order not to change.”  In 2014, I met GM Sam Chin right when I was about to quit training in the martial arts altogether.  I reluctantly went to a workshop he was holding in Boston, mostly at the suggestion of others, and I didn’t have high hopes.  In my view at the time, I figured the event was just going to be another internal arts master who was going to waste my time and have me wave my arms around for a day.  I showed up at the workshop and sat down on the ground to GM Sam Chin’s opening talk. This talk was almost two hours long but by about 3 sentences in, I was hooked.

As GM Sam Chin talked about his approach, I was thinking to myself, this is fascinating.  He was explaining how the system was based in Zen and Taoism, and how one should approach training.  Once the talk was done and we took a short break, Sifu came up to me and asked me to show him what I know.  On the touch, my world crumbled like a house of cards.  It was probably the biggest lesson in humility that was ever dished out to me in my life.  In that moment, I realized there was no skill in my skills.  I was frozen in space with nowhere to go.  As excited as I was to learn this art, I was also discouraged because if it took me 40+ years to have “no skill”, I couldn’t even imagine how long it would take to acquire a modicum of real skill. The cost-sunk bias I confronted was real: could I “give up” the four decades of training and start over again?

Being a long time martial arts instructor, the way I learn best is when I am teaching.  I enjoyed taking a concept and conveying it to students in my own words.  Teaching, in a way, was my way of validating to myself if I got the information across.  Having signed up at that Boston 2014 workshop to be a ZXD life-time member, I thought I could take the “fast track” to Instructor level 1, imagining “once I get to that level, I’ll know what I’m doing. “ Well, I had no idea how deep this rabbit hole went—and clearly hadn’t yet grasped Sifu’s process of learning how to learn, much less learning how to teach this ‘learning how to learn!’

Certain aspects of the training, even in the first three levels, do impart real usable skill, a reality which even stumped me more.  How was it that even with the newfound skills, my senior brothers and sisters shut me down with a level of effortlessness I couldn’t fathom, much less figure out? What was I doing or not doing?!  My confusion—or lack of mental clarity—got to the point about 2 years ago that I didn’t even know what I was doing anymore.  I couldn’t figure out why my “skills” were so intermittent.  It couldn’t be my coordination, I reasoned, so I was again lost. That low point, in retrospect, was the beginning of a turning point. 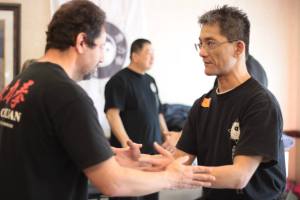 Of course, all this time, GM Sam Chin had been consistent with his message, constant in delivering his viewpoint in that direct, neutral manner that IS the embodiment of his entire Approach,. And he remained unwavering in his willingness to share his art by guiding students to see things for themselves.  In all honesty, though, it has only been in the past 2 or 3 weeks, that I can say I have begun to understand Sifu’s approach TO the approach. Over the course of 7 years, it has been a revolving cycle of me letting go of my current mental constructs, letting go of my identity, realizing my ego, and facing myself on a deep psychological level. I came to realize that I couldn’t just “understand” the viewpoint intellectually and still run the viewpoint through my own filter (which I HAD been doing). After all, the resulting effect of me having done that was that I was still seeing Sifu’s viewpoint through my own filters—in essence, I was changing the viewpoint to MY viewpoint. Although I heard Sifu repeatedly tell me “it’s all about attention, it’s all about constantly balancing,” and him patiently asking me, “Where are you placing your attention?”  I realized I had to embody the principles. I had to change my approach.  I had to change my understanding of the viewpoint—and how I go about in the world, how I see things, how I process information, how I related to other people, how I understand change. All these transformations have had to come through the Zhong Xin Dao viewpoint. Only now could I embrace dropping my viewpoint to really step fully into my role as an instructor of the system — to spread Sifu’s message in the way he needs it conveyed. Otherwise I would be stuck in still just ‘teaching my thing.’

It’s not surprising that I have had to change my approach to teaching in my regular weekly ZXD classes with my students so that I could model the viewpoint by giving instructions through the viewpoint. In this more aligned way, what my students see is TRULY about the viewpoint—guiding them to observe for themselves where (and how) they are placing their attention.

My 30 years of teaching had been getting in my own way—so much so that I couldn’t even see I was going off on a tangent. And my own ego, and my own pride, of my past way of teaching didn’t allow me to ‘let go’ to embrace Sifu’s approach to how to give neutral instructions, or be a ‘finger pointing to the moon’ in a way that effectively guides students to their own learning.  I realized once I embody the viewpoint, Sifu’s approach manifests a quality of simplicity. That elegance has brought a smile to my face and renewed enthusiasm for teaching.  I’ve taught 3 classes so far maintaining this approach, and can witness the students immediately recognizing for themselves the meaning of “The Neutral Touch”.  I am so grateful for Grandmaster’s constant instruction, and for the instructors, too, working so diligently, to uphold the family’s system of cultivation. In this art, the direct experience truly does produce direct results.