March 14th, 2022 UPDATE: We are delighted to confirm that Venerable Jiru will be joining at the UK Zhong Xin Dao and Mindfulness Retreat 2022! 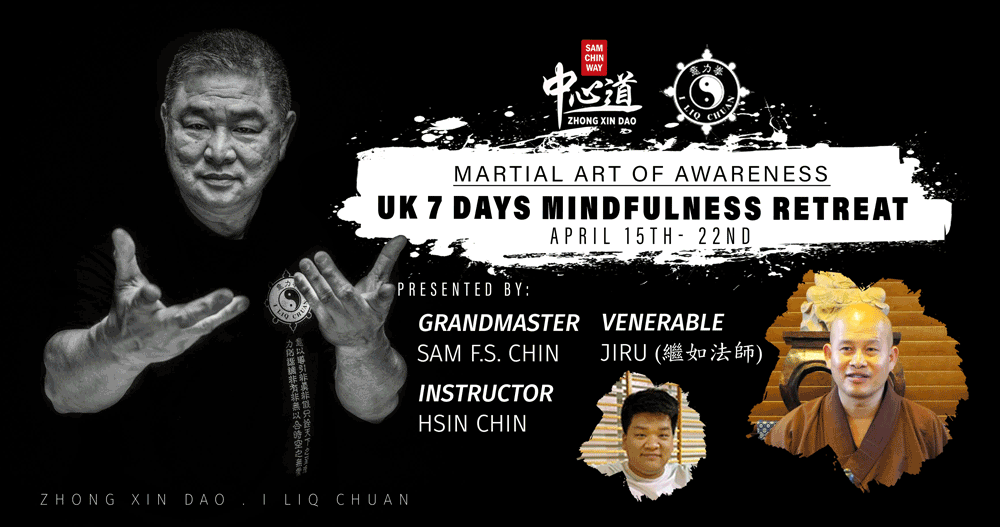 · Dates: Arrival, registration and accommodation – Friday the 15th of April (all day)/End of retreat and departure – Friday the 22nd of April after breakfast

· Times (Saturday the 16th till Thursday the 21st all day): Training schedule to be updated!!!

We are very excited to invite you to participate in our 4th UK Retreat with Grandmaster Sam Chin and Son in April 2022 – 15th till the 22nd. This time we will also host a special guest, a great mindfulness teacher, monastic and GM Sam Chin’s close friend – Master Jiru. For the first time in Europe, you will have an opportunity to experience the unique blend of martial arts and mindfulness teachings altogether!

Join us during Zhong Xin Dao Iliqchuan and Mindfulness UK Retreat in 2020 in Hemel Hempstead near London!

Grandmaster Sam F.S. Chin (曾帆祥) is a Gate Keeper of I Liq Chuan and founder of its unique training method Zhong Xin Dao. He is the founder and President of Chin Family I Liq Chuan Association, as well as the creator of I Liq Chuan Grading System.

GM° Sam Chin trained martial arts since childhood by his father – the founder of I Liq Chuan, Chin Lik Keong. During the 1980’s, GM° Sam Chin won numerous competitions, as well as the state heavyweight kickboxing championships of Selangor (Malaysia) in 1978. He was also recognized by the USA Martial Arts Federation as a Hall of Fame Outstanding Master.

In August 2009, GM° Sam F.S. Chin is officially named the Gate Keeper / Lineage Holder of the art by his father, founder of I Liq Chuan, Chin Lik Keong.

In June 26th 2016, Master Sam Chin become ‘Vice President of Technical Committee’ of World Fighting Martial Arts Federation (WFMAF) He was also was awarded with his 9th Grandmaster Dan Rank for his contribution to the Martial Arts community worldwide.

In November 2017 he became an honorary professor of State University of Plovdiv, fitting recognition for life dedicated to Zen and research into martial arts.

In 1992, Ven. Jiru traveled to the US to share the Dharma, and was later appointed abbot of the Temple of Enlightenment in NYC, and served there from 1992-1994, and again from 2002-2004. It was around this time that Grandmaster Sam Chin first came to the United States. With Ven. Jiru’s help, Grandmaster Sam Chin was able to stay as an employee in Chuang Yen Monastery where Ven. Jiru would serve as the abbot at the time, after which he retired to Augusta, MO full time to focus on building and developing MABA, a fully functioning Buddhist monastery.  With the exception of a single existing structure, Ven. Jiru, along with the other monastics and laypersons, built MABA brick by brick into the amazing place it is today.

In August 2017 upon Grandmaster Sam Chin’s request, Ven. Jiru agreed to host the first annual meditation retreat for I Liq Chuan students, guiding them in the “Four Foundations of Mindfulness”, using the four main postures of sitting, standing, walking and laying down. Ven. Jiru has a very unique and practical approach to teaching mindfulness. Although Zhong Xin Dao Iliqchuan is not specifically a “Buddhist” art, Grandmaster Sam Chin desired his students to receive deeper guidance in concentration and mindfulness practice from a true teacher like Ven. Jiru

Training Schedule (Saturday the 16th till Thursday the 21st): To be updated!!!

Full retreat fee will be:

Price includes tuition and training, basic accommodation (bunk bed) for full stay and three meals daily. There are only 26 bunk beds which will be reserved for those attending full retreat first. There are duvets & pillows in the bedrooms, linen will be provided as well.

For those who are not able to stay with us at Felden Lodge price will be the same.

(Please use ‘pay as a friend option’. As a REFERENCE please state your food preferences MEAT/VEGETARIAN/VEGAN) or

(As a REFERENCE please state your food preferences MEAT/VEGETARIAN/VEGAN)

Do not miss the opportunity to train intensively with Master Jiru, Grandmaster Sam Chin and Son during the only visit in the UK in 2022!